skip to main | skip to sidebar

Work off the holiday stuffing...Last Dog Walk Downtown LA for 2008

Are you stuffed from all the holiday goodies? From the twelve days of Christmas office food platters; countless holiday parties and dinner with the family? Well work off the wiggle and giggle of the holidays at the last Dog Walk of 2008. We’ve had a great year, countless new residents have joined and explored downtown.

As always, the walk is held on the second Wednesday of the Month at 6 pm, Pershing Square. Dress to impress; bring your best holiday doggie outfit and win a prize.

From last weeks Downtownnews: Downtown Dogs! As downtown dog owners we already know the joys and difficulties of having DTWN dogs. Now the secret is out and it can only be a good thing.

DOWNTOWN LOS ANGELES - My fling with Dexter started a few weeks ago. We'd been on several walks through Downtown together. Some were early morning romps that were playful and sweet, while others lingered late in the evening when the lights of City Hall cast lovely shadows on the grass below.

A mix of Shepherd, Akita and Chow, he's a gorgeous specimen with silken blonde hair, warm, amber-colored eyes, and an imposing presence that makes people step aside and stare in appreciation.To be honest, I got a bit of an inferiority complex walking next to him. Not an outing went by when he didn't receive at least half a dozen compliments. He was extremely popular with the ladies, especially the elderly women in Little Tokyo who gushed over him like nothing I've ever seen. Even the construction workers at the new police headquarters whistled at him as we passed.He's quite the alpha male. But most just call him a dog.Dexter belongs to my brother, who's studying at Stanford at the moment and needed a petsitter for a few days. I agreed to take care of Dexter partly because he's so easygoing and partly because I wanted to experience what it is like to have a pet in the city. For about a year I tried to wheedle my husband into agreeing to a dog. But now that we have an 8-month-old, we have precious little time.This seemed like the perfect way to see how the pet-owning side of Downtown lives. According to the Downtown Center Business Improvement District, nearly half of the new wave of Downtown residents have dogs. The Central City is extremely liberal when it comes to having a pet, and only a handful of residential buildings don't allow animals. But I've often heard complaints about the lack of pet-friendly amenities like dog parks and green spaces for Fido to run off-leash or do their business in peace.My first few days with Dexter passed quickly, and we developed an easy routine of 6:30 a.m. walks, then a break after lunch to get a cup of coffee and a long stroll in the evening. My husband took him out one last time before bed, often with our neighbor's dog, Yao, whom he befriended. It was a great break from the computer and a way to get some exercise, and I swear I had lost a few pounds by the time he left.I immediately saw the social aspect of having a dog in the city. I ran into my neighbors more often and finally spoke to people I'd seen dozens of times but never said a word to. Strangers would come right up and pet Dexter, and we'd invariably strike up a conversation about his breed or what kind of dog they had.

Other Downtown dog walkers generously shared a few choice spots for taking Dexter to relieve himself, or flashed a friendly smile as our canines sniffed each other. I began to learn which dogs were not well behaved, which owners didn't pick up their poop and which routes to take. I usually traveled north on Spring Street past the L.A. Times parking garage, where a strip of groundcover has become a makeshift dog park, and then made my way up to City Hall and into the park on the south lawn.Nothing personal against our lawmakers, but Dexter had a thing for taking his business right to the steps of City Hall, especially if there was an urgent matter on his agenda. After a while, I started to think maybe it was his way of staging a silent protest, urging our representatives to do something about the lack of parks.
Our route took us through Little Tokyo and looped back around on Second Street past the wide promenade of trees and landing of sparse grass littered with evidence of frequent use. We'd pass the Higgins Building, where we saw a constant stream of Chihuahuas, weenies, pits and mutts, then back home.One thing I liked about having Dexter with me when I took the baby out in her stroller was the added sense of security. In addition to his blonde good looks, he's nearly as big as a horse (okay, a small pony). He lets kids jump all over him and pull on his hair, but there's the sense that you don't want to mess with him or his human companions. I felt like I could walk more freely Downtown, and even later at night by myself.Thanks to the explosion of new residents and their dogs, there's no shortage of pet services Downtown, from Lofty Dog to Bark Avenue to Pussy & Pooch. When it came time to give Dexter a bath, I made an appointment at Muttropolitan in Little Tokyo's Honda Plaza. They have some of the most affordable rates for a dog his size, and he came out looking like a fluffy, blow-dried rock star.By about the sixth day I was starting to see just how much work a dog takes, and I was ready for a break. There were a few times in the evening when I was so tired that walking a dog was the last thing I wanted to do. I thought about how nice it would be just to sit somewhere while Dexter ran around. Some buildings have a rooftop dog park or dog run, but many don't.I wondered how the professionals do it, the walkers I've seen around the neighborhood with six dogs. I called David Cerwonka from Walk Fido, a 3-year-old Downtown walking service, to get his thoughts.Cerwonka says it's simple, really. The urban landscape is one big adventure for dogs, who instinctively want to roam for long distances, explore new places and experience a satisfying sense of exhaustion and accomplishment at the end of the day.It makes sense. The same can be said of all of us, I guess. 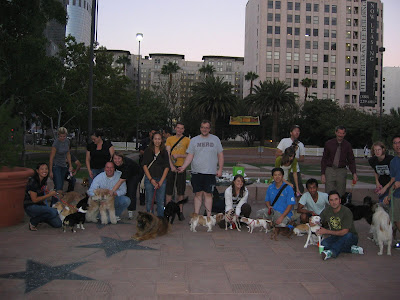 Two weeks ago on Oct. 8, 2008 over two dozen downtown residents and their dogs celebrated our 1st Year Anniversary.  For a year we've walked, talked and explored downtown Los Angeles making new friends and meeting our neighbors.
Special thanks to LAPD Senior Lead Officer Duarte, Hal Bastian of the Downtown BID, Cabrini of the Lofty Dog (doggie cake sponsor), Rob of Pussy-n-Pooch (dog treats), Showbiz Ribs and last but not least Celia, Jim and Wonton for their continued support.
It's clear that in the past year we've seen tremendous growth in downtown and together we can bring forward change to the city; advocate for improvements and amenities such as open public spaces for our families and dogs.
Thank you for the continued support and friendship, see you all next month. 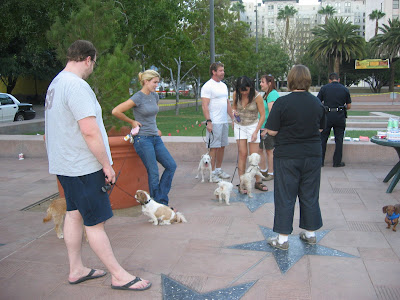 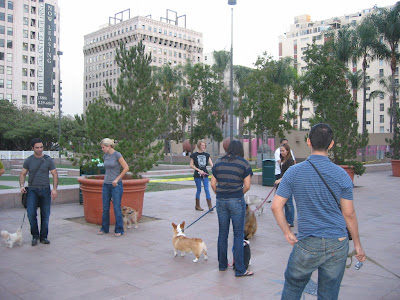 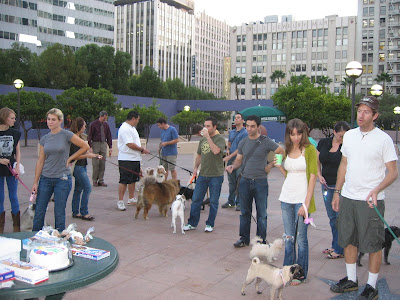 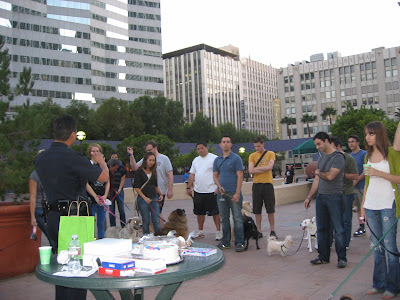 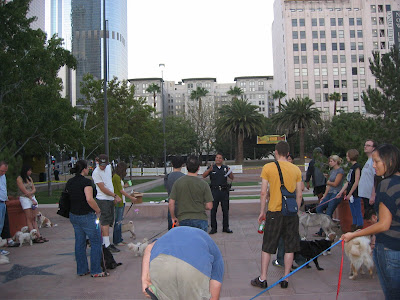 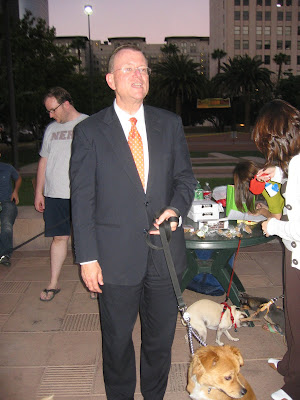 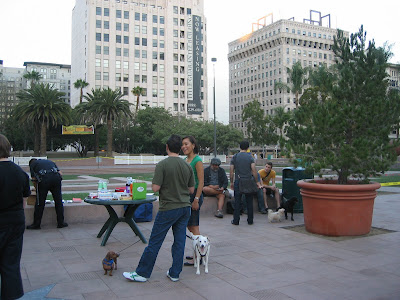 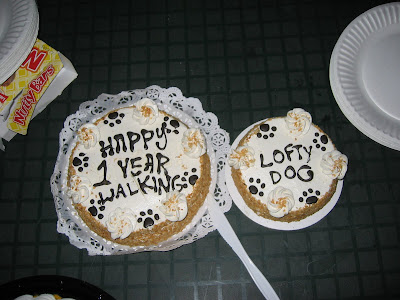 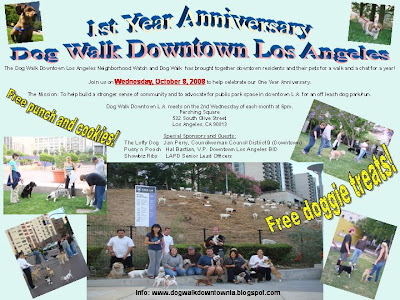 For a few weeks our puppies and pooches became only the 2nd most interesting four legged animals in downtown. With the CRA's master plan to clear the hillside of 4th Street and Hill with goats, lots of downtowners made their way to the hill; that included the dog walk. 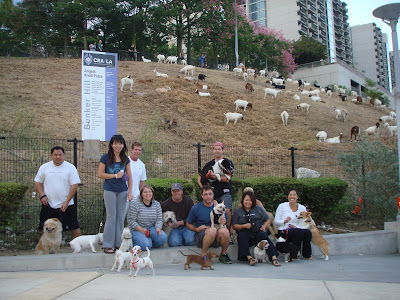 Who are they talking about? Urban Scrawl 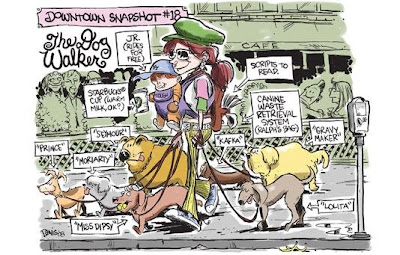 Some photos from the last dog walk. A great summer turnout had new and old friends taking a walk up the hill to Olive and 4th to run loose at the park. 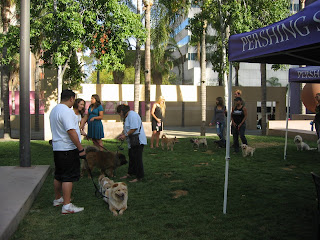 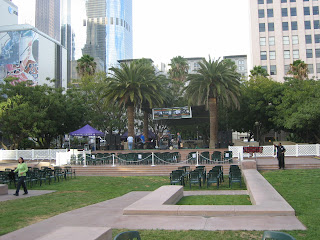 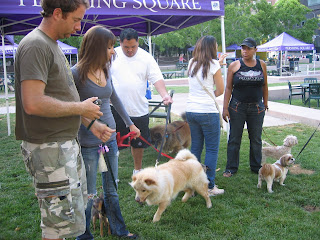 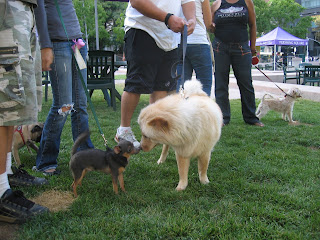 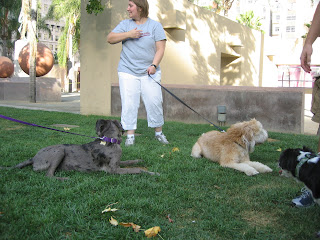 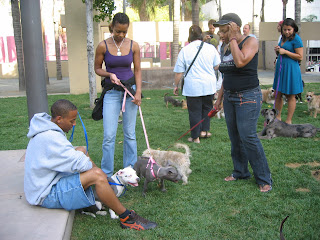 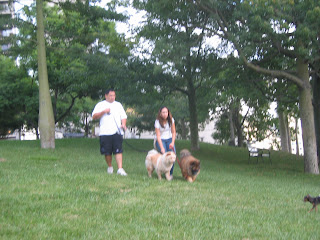 Not a Dog Park yet! But a new park Downtown

Yesterday we made our first visit to the Vista Hermosa Park. It's on the outskirt of downtown L.A. but really close: only a shot drive on 1st Street just across Beaudry.
Although there's no specific area for dogs "YET!" we saw lots of residents walking their dogs and a few took liberties off-leash chasing each other around the park. 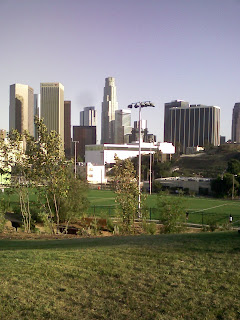 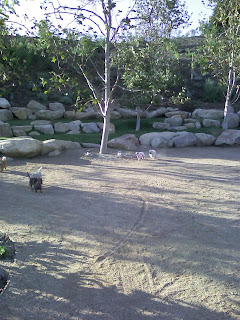 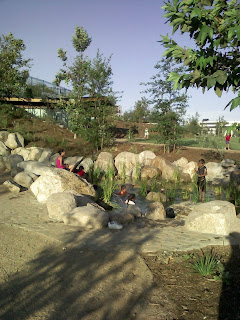 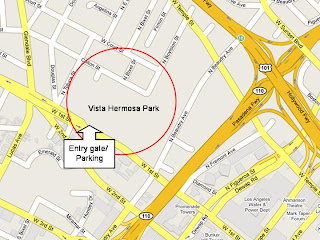 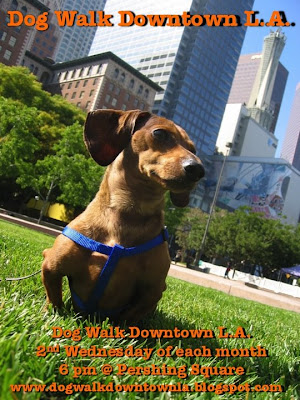 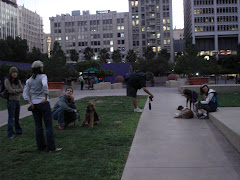 What is Dog Walk Downtown L.A.?

The "dog walk" is a once a month event held on the second Wednesday of each month at Pershing Square with the goal of bringing together downtown residents and their pets for a walk and a chat.

Hopefully together we will help encourage City Hall into allocating an open public green space for an off-leash dog park.

Come out and meet your neighbors!!

Come out Wednesday December 10, 2008 at 6:00 pm for the next Downtown L.A. Dog Walk and Neighborhood watch. Join your fellow downtown residents and their dogs for a tour of downtown streets.

When: 2nd Wednesday of the month 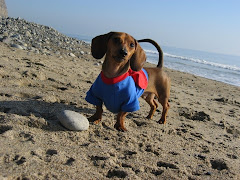